Bonjour! This week on our adventure series, because it is my anniversary, we will be traveling to the most romantic city in the world! Paris, France. Have you been? I have my passport ready let’s go!

There are so many things to do in France, it is going to be hard to fit it all in! I want to visit the Louvre, and see the city from the top of Notre Dame!  Please take me ice skating  at Champs Elyeese!  I want to walk through the Pere Lachaise Cemetery, I’ve heard it’s gorgeous!

The Eiffel tower was built in 1889. The Eiffel tower is the most enduring iconic symbol of Paris. It is also called the Iron Beauty. It is 324 meters, or 1063 feet tall, which is about the height of an 81 story building. It is one of the most visited monuments on earth.

Since the beginning in 1889 visitors have been able to ride a lift to the top of the Eiffel Tower to see all of Paris. We may take elevators for granted today, but this was a great achievement for the time. The first elevator was designed by Roux, Combaluzier and Lepape. The car or lift, was pushed from below, rather then pulled from above, to prevent chain buckling. The second lift to the second level was more of a challenge. Otis Brothers and Company were the only ones willing to undertake the work. They designed the car into 2 superimposed compartments holding 25 people each, and was powered by an inclined hydraulic ram. The third lift was built by Leon Edoux and had a hydraulic ram also.

The elevators today have been revised, and some have been replaced. They are subject to harsh treatments, including wind, rain, snow, and daily use. The elevators combined journey annually equal to going around the world two and half times!! Because the elevators are essential to the monument, the cabins, electrical computer systems along with the historical machinery behind the elevators receive the greatest care. They are constantly checked by technicians. 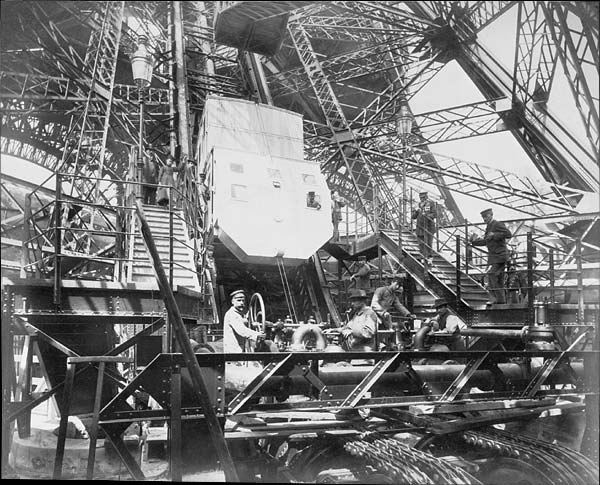